News Ticker
From The Executive Producer of The Boondocks and Everybody Hates Chris
Award-winning executive producer/writer Rodney Barnes (The Boondocks, Everybody Hates Chris) teams up with acclaimed comics creator Alan Robert to develop an animated television series based on Robert’s hit IDW Publishing graphic novel Killogy. Barnes and Robert will serve as executive producers on the series, with Barnes penning the screenplay for the pilot. Celebrities Frank Vincent (Goodfellas, Casino, The Sopranos), Marky Ramone (Rock and Roll Hall of Fame inductee, the Ramones) and Brea Grant (Heroes, Dexter), who all appeared as main characters in the graphic novel, will now lend their voices to the show. Producers Chris White (My Super Psycho Sweet 16 franchise) and Jeff Mazzola (Descent) are also on board.

Killogy leverages a unique mix of humor, horror and pop culture to tell the unique tale of a group of murderers who inadvertently unleash an ancient voodoo curse upon New York. “For me, it’s all a bit surreal,” says Robert. “I basically get to mash-up some of my favorite childhood heroes, throw them into these outrageous situations, and sit back and imagine what happens next. The series practically writes itself!”

Additionally, Ex-Misfits horror-punk legend Doyle Wolfgang von Frankenstein will star in a special Halloween edition of Killogy. The one-shot comic continues where the graphic novel left off. It introduces new character, Doyle, as humanity’s last hope in a post-apocalyptic world flooded by an ocean of blood. The book will also feature a 10-page exclusive first-look at Robert’s forthcoming IDW series The Shunned One.

Killogy was nominated for Best Mini-Series at the 2013 Ghastly Awards and picked up a Horror Comic Award for Best Scene from ComicMonsters.com. Bloody Disgusting listed Killogy at #4 on their Top 10 Best Mini-Series of 2013. The Killogy 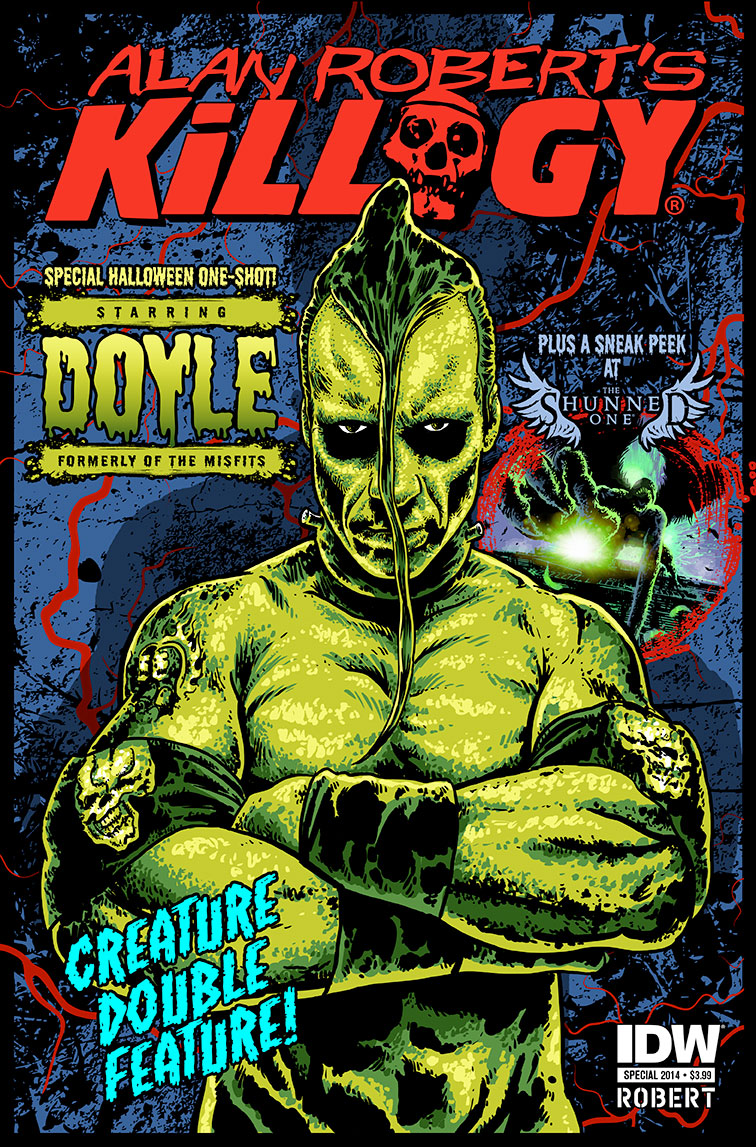 graphic novel was recently licensed out to territories outside of the U.S. and will see a Brazilian release this summer from publisher NFL ZINE. The book will be translated in Portuguese. Visit the official website for more info:
http://www.killogycomic.com

About Alan Robert
Alan Robert is best known for being the primary-songwriter and bassist for the respected hard rock group Life of Agony for over two decades. LOA recorded several studio albums for Epic/Sony and Roadrunner Records developing a cult following in the process. The band has shared the stage with the biggest names in rock, including Metallica, Black Sabbath, and The Red Hot Chili Peppers. The group has headlined to audiences as large as 500,000 people in Europe and will appear on several festival dates this summer.

In recent years, Robert has made quite the name for himself in the world of comics with three critically acclaimed series under his belt; Wire Hangers (2010), Crawl to Me (2012), and Killogy (2013). Robert’s much anticipated The Shunned One is expected for a 2015 release. His hit series Crawl to Me is in development to become a live-action feature from the makers of The Orphanage. Barcelona-based Rodar y Rodar will produce along with Robert’s production company Wasted Talent Entertainment, based on a screenplay written by TJ Cimfel and David White.